As anyone interested in the Lords’ Witnesses will know, we have made many mistakes in predicting the detailed end-times chronology. I cover this topic in the earlier paper Crazy Prophets. This, needless to say, has created the need for church members to be patient whilst not fully understanding why we have been given (and accepted!) this seemingly mission impossible. That, coupled with my own personal exasperation at the state of the world, has lead to my considering the nature of patience and the part it should play in a Christian’s life.

Let us start this journey by understanding the dictionary definition of ‘patience’. According to Wikipedia ‘Patience (or forbearance) is the ability to endure difficult circumstances such as perseverance in the face of delay; tolerance of provocation without responding in annoyance/anger; or forbearance when under strain, especially when faced with longer-term difficulties.’

So what does scripture tell us about this very necessary human quality?

Paul’s letter to the Roman congregation would appear to hold the definitive description of the Christian virtue of patience. According to Paul, it would seem that, our hope in Christ will cause us to live through difficult times in which we must persevere with our faith. Paul also considers that our perseverance through those difficult times will thereby also prove our strength of character in the face of adversity. Well I can certainly attest to that description. The Lords’ Witnesses’ continual failure to pin down the detailed end-times chronology over several years now can attest these qualities to my brothers remaining within our ranks. Through all those difficult times we still maintain our faith in the good Lord to come good on His promises albeit to His timetable not ours.

In the following verses the Greek word ‘ὑπομονὴ', although generally translated as ‘steadfastness’ or ‘endurance’ in most texts, can also carry the meaning of ‘patience’ which of course would be an alternative wording but with the same base meaning:

2 through whom also we have had access by faith into this grace in which we stand, and we glory on the hope of the glory of God. (GLT)
2 δι' οὗ καὶ τὴν προσαγωγὴν ἐσχήκαμεν τῇ πίστει εἰς τὴν χάριν ταύτην ἐν ᾗ ἑστήκαμεν, καὶ καυχώμεθα ἐπ' ἐλπίδι τῆς δόξης τοῦ θεοῦ· (WHO)
3 And not only so, but we glory also in afflictions, knowing that affliction works out patience, (GLT)
3 οὐ μόνον δέ, ἀλλὰ καὶ καυχώμεθα ἐν ταῖς θλίψεσιν, εἰδότες ὅτι ἡ θλίψις ὑπομονὴν κατεργάζεται,(WHO)
4 and patience [works out] proven character; and proven character, hope. (Romans 5 GLT)
4 ἡ δὲ ὑπομονὴ δοκιμήν, ἡ δὲ δοκιμὴ ἐλπίδα, (Romans 5 WHO)

A little further on in his letter to the Romans, Paul again refers to the necessary quality of endurance aka patience:

25 But if we hope for what we do not see, through patience we wait eagerly. (Romans 8 GLT)

It is beginning to look as if Paul considers the Romans to be an impatient bunch:

Paul’s first letter to the congregation at Corinth defines true love towards our fellow man as having several qualities, one of those being patience. We have a different word for ‘patience’ in the following scripture. The Greek word ‘μακροθυμεῖ' although generally translated as ‘long-suffering’ in most texts can also carry the meaning of ‘patience’ which of course would again be an alternative wording but with the same base meaning:

Paul also exhorts his Ephesian congregation to conduct themselves with appropriate Christian behaviour again with the inclusion of a long-suffering demeanour:

1 Then I, the prisoner in [the] Lord, exhort you to walk worthily of the calling in which you were called,
2 with all humility and meekness, with long-suffering, bearing with one another in love, (Ephesians 4 GLT)

And more of the same in his letter to his congregation at Colossus:

12 Therefore, as elect ones of God, holy and beloved, put on bowels of compassions, kindness, humility, meekness, long-suffering, (Colossians 3 GLT)

Whilst, in his letter to the congregation in Galatia, Paul does not use either specific word for ‘patience’, his meaning is the same:

9 But we should not weaken in doing good, for in due time we shall reap, if [we] do not faint. (Galatians 6 GLT)

It is Matthew’s gospel that gives us the main reason for which we need patience; we need steadfast patience to await the coming of our Lord, Jesus Christ:

This need for patience is confirmed in James’ epistle. Here there is the clear indication that the Lord will not come until the time is right from God's point of view and from that alone:

7 Be patient therefore, brethren, unto the coming of the Lord. Behold, the husbandman waiteth for the precious fruit of the earth, and hath long patience for it, until he receive the early and latter rain.
8 Be ye also patient; stablish your hearts: for the coming of the Lord draweth nigh. (James 5 KJV)

And in Paul’s letter to the Hebrews:

It would appear that Paul’s congregation in Thessalonica were somewhat more advanced in their faith than some of the other churches of the day in that Paul praises them for their manifest patience in awaiting Christ’s ultimate reward:

4 so as for us to boast ourselves in you in the churches of God for your patience and faith in all your persecutions, and the afflictions which you endure, (2 Thessalonians 1 GLT)

All the previous scriptures are taken from the New Testament. However the following message from the Book of Isaiah rings true similarly for the faithful Jews. The accent again in the Old Testament scriptures seems to be the concept of waiting for God’s ultimate gift to mankind:

And from the prophet Jeremiah:

25 The LORD is good unto them that wait for Him, to the soul that seeketh Him.
26 It is good that a man should quietly wait for the salvation of the LORD. (Lamentations 3 JPS)

And God’s words to the prophet Habakkuk:

3 For the vision [is] still for the appointed time, but it breathes to the end, and it does not lie. Though it delays, wait for it, because coming it will come; it will not tarry. (Habakkuk 2 GLT)

King David got his reward for waiting patiently for the Lord; today’s Christian needs that same patient virtue to await his reward:

1 {To the chief Musician, A Psalm of David.} I waited patiently for the LORD; and he inclined unto me, and heard my cry. (Psalms 40 KJV)

One of the best known examples of patience shown in the Old Testament was that of Jacob serving his seven-year servitude to Laban for the hand of Rachel in marriage as covered in the Jewish Weddings paper. This is a symbolic parallel for today’s Christians awaiting their wonderful future upon Christ’s return:

20 And Jacob served seven years for Rachel; and they were in his eyes like a few days, in his love for her. (Genesis 29 GLT)

All the previous verses have been about the patience required by a man to be a true Jew or Christian awaiting God’s promise of the life to come. We now have a scripture from Peter’s second epistle referencing the nature of God’s own patience in awaiting the repentance of all mankind. However, the nature of God’s patience must be very different from that of mankind if God does truly live outside of time, as my previous paper Time proposes. God’s patience thus cannot be that of waiting for us to all sort ourselves out while He sits twiddling His divine fingers. His must be the patience of meticulously creating a universe and life beyond Himself in which all His created children will aspire to become His true sons and daughters:

8 But let not this one thing be hidden [from] you, beloved, that one day with [the] Lord [is] "as a thousand years, and a thousand years as one day." [Psa. 90:4]
9 The Lord of the promise is not slow, as some deem slowness, but is long-suffering toward us, not having purposed any to perish, but all to come to repentance. (2 Peter 3 GLT)

And having exhorted the Roman congregation numerous times to maintain their patience as we have seen previously, Paul then encourages them with God’s own patience towards them:

5 And may the God of patience and encouragement give to you to mind the same thing among one another according to Christ Jesus, (Romans 15 GLT)

Paul takes this one step further in his first letter to Timothy in acknowledging Christ’s patience in this same respect. Since Christ became divine upon His ascension (http://www.truebiblecode.com/intro26.html), it would seem that His type of patience would bridge the gap between God and man, which is exactly what one might expect. His life on earth was the epitome of human long-suffering as He withstood the ill-treatment at the hands of men whilst knowing that He was there to ultimately save us all. After His ascension He would then have the same view as His Father when all of mankind’s future activity on earth would then become clear to Him as He witnessed the long-suffering of His followers still on the earth:

16 But for this reason I received mercy, that in me first Jesus Christ might show forth all long-suffering, for an example to those being about to believe on Him to everlasting life. (1 Timothy 1 GLT)

Interestingly it would seem that the 1NC Saints who died in the first century for their faith in Christ will show a sense of impatience when awoken from Hades. They will wish to know how much longer they must wait for God’s justice to be applied to the whole of mankind come judgement day:

9 And when He opened the fifth seal, I saw under the altar the souls of those having been slain for the Word of God, and for the witness which they had.
10 And they cried with a great voice, saying, Until when, holy and true Master, do You not judge and take vengeance [for] our blood, from those dwelling on the earth?
11 And there was given to each one a white robe. And it was said to them that they should rest yet a little time, until might be fulfilled also [the number] of their fellow-slaves and their brothers, those being about to be killed, even as they. (Revelation 6 GLT)

As one would have thought, patience is seen as a necessary quality to having faith in God since we must all await full justice to God’s timetable and not one of our own making. This was seen to be the case for the Old Testament Jewish nation as well as the 1st century followers of Christ in biblical times. Never was patience awaiting God’s justice more necessary than for today’s Christian living in a world full of evil, without witnessing Jehovah's or Jesus' miracles at first-hand but being as desirous of the Kingdom to come as our forebears. Amen. 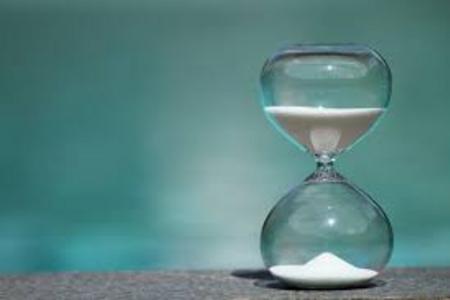