​We Are All God's Children

Now that we know from [26] When Jesus gave his life for us, he became the second God to be worshipped like his father Jehovah that Jesus has entered into the family name of Jehovah we can see our future:

24 A disciple is not above the teacher, nor a slave above his lord.
25 [It is] enough for the disciple [to] become as his teacher, and the slave as his lord. If they called the master of the house Beelzebub, how much more those of his household? (Matthew 10 GLT)

So, taking verse 24 together with the first half of verse 25 we all have the opportunity, even destiny, to become Gods like Jesus if he is our Lord and our Teacher. The second half of verse 25, however, shows us the other side of that coin. If we become willing sinners and follow Satan as our king, then we will be destined to become as the demons and suffer the fate of demons.

23 For all have sinned, and come short of the glory of God; (Romans 3 KJV)

Those who are born again angelically are regarded by God as not sinning (being able to walk without falling over) even though they have sinned in the past but have honestly repented and got baptised. However, he who never sins has achieved perfect righteousness and perfect love and so qualifies to be a God. Jesus’ own words support the proposition that ultimately we are all God’s children:

34 Jesus answered them, Has it not been written in your Law, "I said, you are gods"? [Psa. 82:6]
35 If He called those gods with whom the Word of God was, and the Scripture cannot be broken,
36 do you say [of Him] whom the Father sanctified and sent into the world, You blaspheme, because I said, I am Son of God? (John 10 GLT)

As the Green’s Translation reference above shows us, and to emphasise the point, Jesus was referring to Asaph’s Psalm:

For all human beings are products of the love and the generosity of Jehovah who, having elevated his angelic son Jesus Christ to the status of God, will not fail to show the same love for and confidence eventually in all his other sons and daughters. We are children of God, our future is to be Gods just like our Father. That is the race that we come from.

So the true religion is bi-theistic. Therefore the Lord's Witnesses have become the Lords' Witnesses. This minor syntactical modification to our name, represents a major theological earthquake. Every church in this world bar one (to our knowledge) is worshipping the wrong number of Gods (1 God or 3 Gods)! If your church cannot get that one right, what hope do you have? It is like our second God once said of the Pharisees:

14 Leave them alone. They are blind leaders of the blind; and if the blind lead the blind, both will fall into a pit. (Matthew 15 GLT)

To further confirm our thesis, Jesus tells James and John (the two sons of Zebedee) that, at some time in the future, they will both share in Jesus’ divine baptism when they are ready to accept it:

39 And they said to Him, We are able. But Jesus said to them, Indeed you will drink the cup which I drink, and you will be baptized [with] the baptism [with] which I am baptized. (Mark 10 GLT)

Jesus became a God to be worshipped like Jehovah after he gave his life as a ransom. He was given the name that is above every other name named, which name is Jehovah.

20 which He worked in Christ [in] raising Him from [the] dead; yea, [He] seated [Him] at His right hand in the heavenlies, [Psa. 110:1]
21 far above all rule, and authority, and power, and lordship, and every name having been named, not only in this age, but also in the coming [age]; (Ephesians 1 GLT)

And as the Green’s Translation reference above shows us once again, this was prophesied by David:

1 [A Psalm of David.] A declaration of Jehovah to my Lord: Sit at My right hand, until I place Your enemies [as] Your footstool. (Psalms 110 GLT)

Jesus, once he became a god to be worshipped, sat at God's right hand - ready to act as God's CEO. But we read in the scripture from Mark above that Jesus had a baptism with which he was being baptised and we know that the result of this cleansing was that he became a God. So, Jesus is declaring that there is a baptism into divinity which he took. Furthermore, sitting down at God's right hand appears to be a component of this baptism test or the result of it. We would, of course, expect there to be a baptism in the process by which angels become gods because being a god is the highest form of cleanliness. It means that you have perfect unbreakable love and perfect unbreakable righteousness. As Jesus said in the sermon on the mount...

48 Be ye therefore perfect, even as your Father which is in heaven is perfect. (Matthew 5 KJV)

So, Jesus was looking to His amassed followers to also become gods at some point in time. If you become perfect then you are a god, like Jehovah the rock, whose activity is perfect:

There are several scriptures in the bible using the phrase God of gods:

17 For Jehovah your God, He [is] the God of gods, and the Lord of lords; the great, the mighty, the fearful God who does not lift up faces, nor take a bribe. (Deuteronomy 10 GLT)

Amongst other possible meanings, these scriptures could also be regarded as a prophecy that there will be more than one individual God and that Jehovah will be Father to them all.

19 Go ye therefore, and make disciples of all the nations, baptizing them into the name of the Father and of the Son and of the Holy Spirit: (Matthew 28 ASV)

The above scripture shows us the path towards divinity ([26] When Jesus gave his life for us, he became the second God to be worshipped like his father Jehovah) which is as follows:

1. Gain everlasting life, i.e. be baptised into the ARC to become a permanent angelic son of Jesus.

2. Enter into one or other holy spirit, becoming a part of the wife of a God. For one cannot become a God without first joining a divine administration.

3. Become the head of that holy spirit, the Chief Executive Officer of a God. 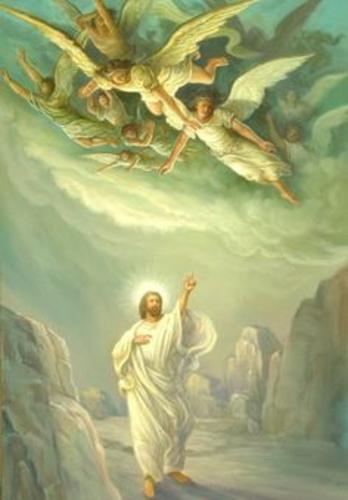