The Lords’ Witnesses believe that 75% of the human race will be saved into the Kingdom come Judgement Day. The main basis for this understanding is based on the following two scriptures:

The above two scriptures need to be taken additively. Firstly Matthew is telling us that 50% of men and 50% of women are saved into the Kingdom and the other 50% of men and women are not. The fate of the 50% not saved in the Matthew scripture are then further subdivided into another 50% division through the Luke scripture whereby 50% of the 50% are then saved, i.e. a further 25% are saved and the remaining 25% are sent to Gehenna. In each of these categories, men and women are divided equally.

These sub-divisions need further breaking down. To help with this let us look at a further scripture from Matthew’s gospel:

Here we are being told that there are two major commandments for mankind to follow: to love God and to love your fellow man and in that priority. If we then go back to the two sub-divisions of the righteous and the unrighteous, we see that the first split is between those that love God and those who do not. So, 50% of mankind are saved from the destruction of the earth into the ark. The second split of those who do not love God is then between those who love their fellow man and those who do not. So, a further 25% of mankind is also saved; these ones are not taken into the ark but are protected through the Time of the Distress of Daniel12 by the angels, whilst remaining on the earth, like the 3 Hebrew boys in the fiery furnace of Daniel3, whilst remaining on the earth. The Lords’ Witnesses have identified numerous different salvation covenants for mankind. The 50% saved in the Matthew scripture are saved into the Faith Ransom Covenant and the 25% saved in the Luke scripture are saved into the Love Ransom Covenant.

The 25% who end up in Gehenna are those that neither loved God nor their fellow men; that is God’s justice! This 25% is confirmed in the Book of revelation in that the fourth part of the earth will be killed in the end-times:

8 And I looked, and behold a pale horse: and his name that sat on him was Death, and Hell followed with him. And power was given unto them over the fourth part of the earth, to kill with sword, and with hunger, and with death, and with the beasts of the earth. (Revelation 6 KJV)

Now the saving of 75% of humankind into the Kingdom is certainly very good news for us all given the state of the world that we are leaving. However, there are some scriptures that would appear to paint a very different picture of the numbers saved:

On the surface the above scripture would appear to suggest those saved are few in number. The narrow gate is for the saints only (our calculation is 1% of the world population: [366] Numbering the Saints and the Citizens of the Kingdom of God).  These ones are those saved into the ark that are born again and are sealed spiritually and represent the leadership and priesthood going into the Kingdom of God. 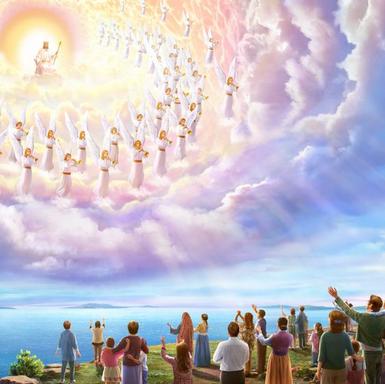