Scripture defines two deaths for mankind. The first death is the physical death (the grave or Hades) with which we are all only too familiar, i.e. the death of our physical bodies. Scripture describes it as being asleep:

The above scripture also tells us that we are awakened either as righteous ones to life in the Kingdom or as the unrighteous into some form of punishment. This latter is the second death, Gehenna or Hell. But what is the true nature of this second death in Gehenna? Now, most bible versions translate the Hebrew word ‘עולם‘ as ‘everlasting’ from which stems the idea of the punishment in Hell being for eternity. This, plus the following scripture from the Gospel of Matthew, builds up the common view of eternal damnation and hellfire:

41 The Son of Man will send forth His angels, and they will gather out of His kingdom all the offenses, and those who practice lawlessness.
42 And they will throw them into the furnace of fire; there will be weeping and gnashing of the teeth. (Matthew 13 GLT)

But what kind of a God commands us to love our enemies and pray for our persecutors, only to burn these very same people for an eternity in Hell Himself after WE have loved them and prayed for them? God would be asking us to love somebody whom He Himself failed to love. That would be rank hypocrisy:

44 but I say to you, Love your enemies; bless those cursing you, do well to those hating you; and pray for those abusing and persecuting you, (Matthew 5 GLT)

16 And we have known and have believed the love which God has in us. God is love, and the one abiding in love abides in God, and God in him. (1 John 4 GLT)

So, what must be the truth of the matter? Firstly, we believe that the NWT translation of the verse from Daniel, as above, is the correct translation in that the period of time involved, either in the Kingdom or Gehenna, is undefined, i.e. ‘indefinitely lasting’ and not 'everlasting' as most other translations would have it. Someone misbehaving in the Kingdom will risk a term in Gehenna and someone showing true heart-felt contrition in Gehenna will obtain their get-out-of jail card at the appropriate time. The time-period is defined by the individual's behaviour and God's judgement of that behaviour!

God’s love for us all is seen in the following two scriptures. God will punish all the unrighteous ones only for such time until they show repentance:

31 For the Lord will not cast off forever.
32 For though He causes grief, He will have pity according to His many kindnesses.
33 For He does not afflict from His heart, nor does He grieve the sons of man,
34 to crush all the prisoners of earth under His feet, (Lamentations 3 GLT)

The apostle Peter tells us...

9 The Lord of the promise is not slow, as some deem slowness, but is long-suffering toward us, not having purposed any to perish, but all to come to repentance. (2 Peter 3 GLT)

The nature of the punishment in Gehenna also needs a more refined interpretation:

28 And you should not fear the [ones] killing the body, but not being able to kill the soul. But rather fear Him being able to destroy both soul and body in Hell. (Matthew 10 GLT)

Jesus did not say ‘fear him who can destroy the spirit in Gehenna’. Gehenna preserves the spirit but kills the soul [by which is meant the spirit + personal body combination (What is a Soul? What is a Spirit?]. So, Hell or Gehenna is a soul-less consciousness. It is a non-physical prison for disembodied spirits. ONLY in the sense that you share a soul with others. NOT in the sense that your spirit has no soul. You lose ownership and privacy of your soul. You move from a house to a flat share.

Legion was put on this earth as an illustration of Hell. The demons within the one human body wanted out of that torment but then realised that owning their own pig’s body was worse than having one two-thousandth share in a human body. They consequently drowned themselves thereby returning to their preferable prison term in Tartarus:

9 And He asked him, What [is] your name? And he answered, saying, My name [is] Legion, because we are many.
10 And he begged Him very much that He would not send them outside the country.
11 And a great herd of pigs were feeding there near the mountain.
12 And all the demons begged Him, saying, Send us into the pigs, that we may enter into them.
13 And Jesus immediately allowed them. And coming out, the unclean spirits entered into the pigs. And the herd rushed down the precipice into the sea (and they were about two thousand), and [they] were choked in the sea. (Mark 5 GLT)

27 But he will speak and say to you, I do not know where you are from. Get away from me, all you workers of unrighteousness!'
28 There is where [your] weeping and the gnashing of [your] teeth will be, when you see Abraham and Isaac and Jacob and all the prophets in the kingdom of God, but yourselves thrown outside (Luke 13).

So those in Gehenna will be conscious and will be able to see those enjoying their full soulful lives in the Kingdom. This is why there will weeping and gnashing of teeth because of the life that the unrighteous have lost that they are witness to. The punishment of Gehenna is spiritual not physical. 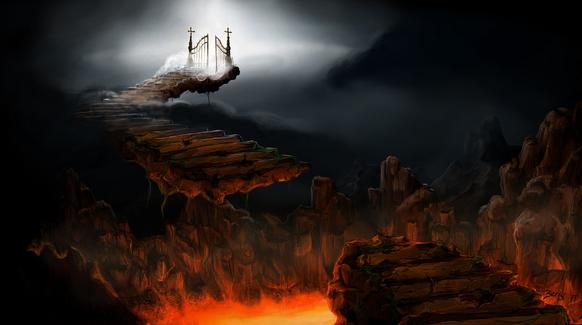